Speaking on behalf of senior author Danielle Bajakian, MD, of Columbia University Medical Center, New York, and colleagues, Elmously will on Wednesday conclude that TCAR within 14 days of a neurologic event results in higher ipsilateral postoperative stroke rates when compared to CEA, especially when performed within 48 hours.

Elmously and colleagues state that carotid revascularization within 14 days of a neurologic event is recommended by society guidelines. They note that TCAR carries the lowest overall stroke rate for any carotid artery stenting technique, but stress that “outcomes of TCAR within 14 days of a neurologic event have not been studied or directly compared to CEA.”

The research team compared in-hospital outcomes of symptomatic patients undergoing TCAR and CEA within 14 days of stroke or transient ischemic attack (TIA) from January 2016 to February 2020 using the Society for Vascular Surgery (SVS) Vascular Quality Initiative (VQI) carotid artery stenting and CEA databases. They note that propensity score matching was used to adjust for patient risk factors, and that the primary outcome was a composite of postoperative ipsilateral stroke, death, and myocardial infarction (MI). The researchers detail that 1,281 symptomatic patients underwent TCAR and that 13,429 patients underwent CEA within 14 days of a neurologic event. After 1:1 propensity matching, they add, 728 matched pairs were included for analysis.

A numbers of the paper’s authors have previously been involved in published research on the topic of TCAR. Recently, co-author of the VAM paper Ambar Mehta, MD, a resident at New York Presbyterian-Columbia University Irving Medical Center, was lead author of the 2021 Journal of Vascular Surgery (JVS) paper “Transcarotid artery revascularization versus carotid endarterectomy and transfemoral stenting in octogenarians.”

Bajakian, as well as co-authors of the VAM paper Priya B. Patel, MD, of NYP-Columbia University Medical Center in Fords, New Jersey, and Virendra I. Patel, chief of vascular surgery at NYP-Columbia University Medical Center, were also a part of the JVS paper study team. In this study, Mehta et al conclude that TCARs had similar outcomes relative to CEAs among octogenarians with respect to 30-day and one-year rates of stroke/death. They suggest that TCAR “may serve as a promising, less invasive treatment for carotid disease in older patients who are deemed high anatomic, surgical, or clinical risk for CEAs.”

However, they stress that TCAR may have similar outcomes to CEA. In the JVS study, therefore, the authors set out to compare outcomes after TCARs relative to those after CEAs and TFCAS, focusing on elderly patients. The researchers included all patients with carotid artery stenosis and no prior endarterectomy or stenting who underwent either a CEA, TFCAS, or TCAR in the VQI from September 2016 (when TCAR became commercially available) to December 2019. The team categorized patients into age decades: 60–69 years; 70–79 years; and 80–89 years.

Writing in JVS, Mehta and colleagues report that they identified 33,115 patients who underwent either a CEA, TFCAS, or TCAR for carotid artery stenosis, where one-half were symptomatic. They reveal that the overall rate of 30-day stroke/death was 1.5% and of one-year stroke/death was 4.4%. Octogenarians had the highest 30-day and one-year stroke/death rates relative to their peers, the authors communicated, at 2.3% and 6.3%, respectively. 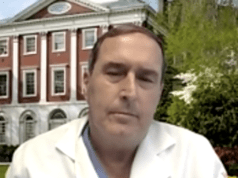