STEAMBOAT SPRINGS, Colo.— Almost 90% of authors who received industry-reported payments did not disclose a financial conflict of interest in their manuscript, a study exploring the issue of compensation made to physician-specialist authors of highly-cited aortic aneurysm papers discovered.

The finding was highlighted by Tiffany Bellomo, BS, from the department of surgery, Section of Vascular Surgery, in the University of Michigan, at the winter annual meeting of the Vascular and Endovascular Surgery Society (VESS) in Steamboat Springs, Colorado (Jan. 30–Feb. 2)

“There is no standardized process to guarantee disclosure,” said Bellomo—part of a research team led by Matthew A. Corriere, MD, the Frankel professor of cardiovascular surgery at the University of Michigan—on the huge percentage who received payments but did not disclose. “This could be for multiple reasons, such as author interpretation as not relevant to the topic, or that smaller dollar amounts were not relevant to disclose. However, this interpretation is left up to each individual author and is not monitored. There were 16 authors who accounted for the majority of total dollars compensated.”

Bellomo outlined the rationale for the study: that financial conflicts of interest potentially influence interpretation of study results. “Scientific journals often require author disclosure of relevant conflicts, but commonly leave disclosure up to author discretion and seldom include detailed quantification of compensation.”

Bellomo et al see no reason to believe vascular specialists are immune to the problem.

“Despite widespread industry sponsorship for trials of treatments for aortic aneurysms, little is known about the prevalence and accuracy of disclosures in related research publications,” she noted.

The investigators aimed to evaluate such conflicts of interest among highly-cited publications related to treatment of aortic aneurysms and identify the scope and prevalence of industry-related payments received whether or not authors self-reported.

The top 99 most-cited publications were “abstracted” for author self-reports. The combined list of authors was then used to query the ProPublica Dollars for Docs— a database that contains payments from pharmaceutical and medical device companies to doctors and teaching hospitals—to identify payments.

“The average disclosure per author was around 0.4 disclosures, but we found no significant difference between mean disclosures per author separated by manuscript type,” she said.

Some 1,368 authors were listed in 99 manuscripts, Bellomo continued. “There were 1,264 unique authors, and of those 105 were identified by ProPublica as having received industry compensation. Interestingly, of those 105, 14 self-reported a financial conflict of interest. That means almost 90% of authors identified as having received industry compensation reported no financial conflict of interest in their manuscript.”

More than 13,489 payments were made to the 105 authors, breaking the $6 million mark—the majority in the form of in-kind items and services.

“Non-disclosed author [financial conflicts of interest] are uncommon, but may be associated with significant payments,” she concluded. “Public reporting of industry payments allows for greater transparency. Greater understanding of [such conflicts] in vascular research will allow additional insight into potential bias and appropriate interpretation of research findings.” 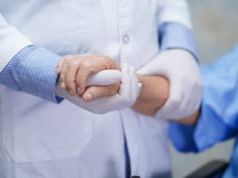