Three members of the Society for Vascular Surgery (SVS) Diversity, Equity and Inclusion (DEI) Committee, chaired by Vincent M. Rowe, MD, explain use and understanding of the term Latinx.

Have you ever heard or read the term Latinx? This piece will look to explain how to understand and use it. Latinx is used as an alternative to the gender binary inherent to formulations such as Latina/o and [email protected], and is used by and for Latinos who do not identify as either male or female, or more broadly as a gender-neutral term for anyone of Latin-American descent.

While there are many historic differences between Mexicans, Puerto Ricans and Cubans, terms such as Latino, Hispanic and Spanish-speaking were coined to describe their language as part of a collective unit.

The term “Hispanic” was first used broadly in the 1970s, and appeared in the United States census in 1980. It was recognized as too limiting, and the term Latino was added to the census in 2000. While the extensive history describing the use of these terms is too long to describe in this article, it is proof of how difficult it is to verbally define this multifaceted community.

Use in medical literature

Latinx has been used increasingly in the literature, with over 800 articles on a PubMed search including the term. It is acceptable to use LatinX in the demographic section to allow for a non-binary description of Hispanic heritage. Most recently when describing COVID-19 impact, the American Medical Association (AMA) utilizes the term LatinX solidifying its applicability.

Within the Cochrane Library, there are 80 trials with the word Latinx—most of them in 2020—focused on the cultural area, family roles and lifestyles, as well as its effect on smoking, drinking and pregnancy in young people.

Use in mainstream society

While Latinx has gotten traction in the academic literature, it’s widespread usage in mainstream society is lagging. Multiple surveys have found the primary users of the term tend to be younger, English speaking or bilingual, and born in the United States.

The Pew Research Center published a survey which showed 25% of U.S. Latinos have heard of the term, but only 3% use the term to describe themselves. Latinx was officially added in the Merriam-Webster dictionary in 2018.

According to the Merriam-Webster dictionary website: “Though Latinx is becoming common in social media and in academic writing, it is unclear whether it will catch on in mainstream use. Nevertheless, it is gaining noticeable traction among the general public as a gender-inclusive term for Latin Americans of diverse identities and orientations.”

While the use of Latinx is not well delineated in mainstream society, it is the opinion of the authors that it is acceptable to use the term as a non-binary descriptor of the Hispanic demographic in medical literature. 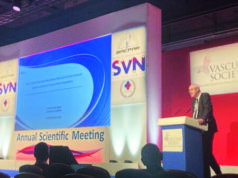