New data provide “another argument” for the use of intravascular ultrasound (IVUS) in below-the-knee (BTK) interventions. This is according to Michael Lichtenberg, MD, from Arnsberg Vascular Center in Arnsberg, Germany, who presented one-year outcomes from the PRESTIGE pilot study at the 2022 Leipzig Interventional Course (LINC) June 6–9 in Leipzig, Germany.

This study was designed to investigate whether an IVUS-guided lesion preparation strategy with the Phoenix atherectomy system (Philips) before drug-coated balloon (DCB) angioplasty can improve outcomes in chronic limb-threatening ischemia (CLTI) patients. The results led Lichtenberg to conclude that the revascularization strategy for below-the-knee (BTK) intervention should be based on diagnostic modality to achieve optimal lumen gain.

How can enough and stable lumen be achieved? This is a central question in daily interventional practice, according to the presenter. In order to address this issue, Lichtenberg and colleagues initiated the core-lab adjudicated prospective, single-arm trial PRESTIGE pilot study, which is being carried out across five centers in Germany. The primary efficacy endpoint is patency at six months, and the primary safety endpoint is freedom from major adverse limb events and/or 30-day perioperative death.

A total of 50 patients have been enrolled in the study, Lichtenberg detailed. Due to the fact that this is a CLTI study, the presenter stressed that the patients presented with high risk profiles and significant comorbidities. “A lot of these patients had renal insufficiency, and a lot had diabetes,” he noted.

Lichtenberg pointed out that the challenging nature of the patients included in this study was also apparent in their clinical symptoms, highlighting that the majority (35/50) were Rutherford 5 and that the mean pre-procedure Wound, Ischemia, foot Infection (WIfI) score was 3.25. Additionally, of the 96 lesions treated in the registry, most were longer than 20cm.

Reporting 12-month results of the PRESTIGE pilot study in a first time data release presentation at LINC, Lichtenberg first revealed outcomes of the technical success analysis. The combination therapy of IVUS-guided lesion preparation followed by DCB angioplasty brought the diameter stenosis down from 93% to 26.02% based on angiography analysis, he relayed.

In terms of the efficacy analysis, Lichtenberg conveyed that there was a “very good clinical outcome” in terms of the WIfI score, which came down from baseline to six months and stayed at a low level out to 12 months. In addition, the Rutherford scale showed a “clinically favorable outcome” for this combination therapy, he informed viewers.

A notable finding of the study, according to Lichtenberg, was that the baseline reference vessel diameter based on angiography was lower than that based on IVUS. “We significantly underestimate [vessel] diameter on angiography in patients with CLTI,” he informed LINC viewers, stressing that “there is a need to find an appropriate diagnostic modality for correct vessel sizing.” 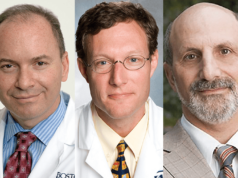