PALM BEACH, Fla.—Discussion of the drug-coated technology issue was piqued during the opening session of the Southern Association for Vascular Surgery (SAVS) annual meeting (Jan. 8–11) in Palm Beach, Florida.

William P. Robinson III, MD, professor and chief in the division of vascular surgery at East Carolina University’s Brody School of Medicine, Greenville, North Carolina, had delivered a lecture on the pro side of a debate entitled “Lower extremity: Endovascular first is always the best approach.”

“Dr. Robinson, your slides lean heavily on drug-coated technology,” a questioner from the floor said. “Have you tweaked your consent in discussion with the patient at all based on that data?”

Robinson answered: “That’s a good point but I will point out that the only drug stuff I talked about was Zilver. It turns out, I had the same general sense that rationally this concern over mortality from these small doses of drug, compared to what’s given in all sorts of other settings for cancer, can make the mortality difference. I sort of have an inherent bias that this must be a statistical—not a patient—phenomenon.

“The Zilver folks did publish a patient-level analysis, and I am concluding … a new randomized study, like all of their previous studies that got Zilver approved, in response to this whole hubbub, and it did not show mortality in their data to date.

“But, that being said, I have changed my practice. I do think it’s a liability—not because I believe it but from a liability standpoint.”

Neville, the chair, noted he and his colleagues, too, had changed their practice, coming up with a set of intrinsic guidelines. “What we have done in our institution is we no longer want people to use drug-eluting technology for claudication,” he told gathered delegates. 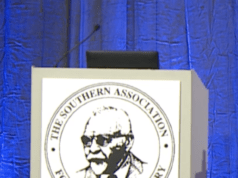