The finding is part of data on the impact of race on outcomes following rAAA repair presented by Ben Li, MD, a vascular surgery resident at the University of Toronto in Toronto, Ontario, and colleagues at the annual meeting of the Canadian Society for Vascular Surgery (CSVS) in Vancouver, British Columbia (Sept. 9–10).

Li and colleagues plumbed the VQI database for all Black and White patients who underwent endovascular or open rAAA repair between 2003 and 2019.

The study’s primary outcomes were in-hospital and eight-year mortality. Some 310 Black and 4,679 White patients were included.

“Although Black patients were more likely to have cardiovascular comorbidities, they were not more likely to receive risk reduction medications,” Li reported.

“There are important racial differences in demographic, clinical, and procedural characteristics for patients undergoing rAAA repair,” Li and colleagues concluded.

“In particular, the door-to-intervention time for Black patients of 168 minutes does not meet the Society for Vascular Surgery [SVS] recommendation of 90 minutes.

“Despite these differences, eight-year mortality is similar for Black and White patients. Future studies should assess reasons for these disparities and [what] opportunities exist to improve rAAA care for Black patients.” 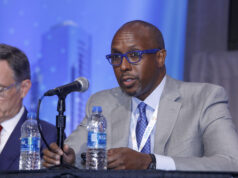