Southern Association for Vascular Surgery (SAVS) President William D. Jordan Jr. used a portion of his 2023 Presidential Address to outline ways in which SAVS is set to further evolve as a professional body going forward.

Titled “Anatomy and physiology: 2.0,” Jordan’s lecture tackled the structure and function of vascular surgery as a specialty, and SAVS as a surgical society, as he addressed a need for change.

One aspect of SAVS set to evolve, he revealed, is the Society’s signature seal, a depiction of 19th-century pioneering surgeon Rudolph Matas, MD (1860–1957), who was selected by SAVS founding members to adorn the logo as an embodiment of the qualities they believed a southern vascular surgeon should possess.

Jordan told SAVS 2023 that SAVS had become aware of concern “that our image among many young surgeons is negatively impacted by having his likeness on our seal. Many of us have great respect for the work he has done, but some have expressed concern about parts of his academic work that was offensive and not respectful to disadvantaged groups of the day. He wrote about medical conditions of many Black patients without obtaining their consent for medical research. While accepted then, it would be considered inappropriate today.

“In our efforts to improve our Society, we turn our eyes to the future” Jordan continued. He said the Society leadership is focused on exploring ways in which SAVS can meet the needs of the current and future generations of vascular surgeons. “As a sign of this commitment,” he said, “your Executive Council voted to redesign our Society’s seal, create a new seal that will exhibit the standards of our professional society, and remains true to our mission of promoting the art and science of vascular surgery and providing comprehensive vascular care.”

SAVS members are being asked to participate in the redesign: “Submit your ideas and be creative; show us that we can remain the best regional vascular society,” Jordan added. 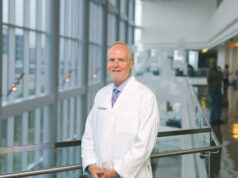