Larry Kraiss, MD, Shipra Arya, MD, SM, and Julie Hales, MS, RN, discussed these methods and tools and their use during “Tracking Frailty in the VQI” as part of the Vascular Quality Initiative (VQI) annual meeting.

Kraiss, who is a professor of Surgery at the University of Utah in Salt Lake City, Utah, noted that he and his team have created a frailty assessment tool that maps variables already used in the comprehensive geriatric assessment (CGA) to established VQI variables. The assessment is an exhaustive survey, taking 90 or so minutes to complete, and is used to estimate longevity.

For the new tool, the team added two variables known to be associated with frailty but not included in the CGA. Using a VQI dataset containing 265,000 arterial reconstructions, researchers tested how well a frailty tool encompassing these data elements correlated with perioperative and long-term survival.

This tool allows comparison of the expected natural history of a vascular condition to be compared with expected 9-month mortality after surgical repair.

In response to concerns that even the shortened VQI frailty assessment tool was too cumbersome to use in a busy surgical clinic, the University of Utah team has been exploring use of the Clinical Frailty Scale (CFS).

“You can consider it to be a simple eyeball test,” said Kraiss during the VQI gathering, which took place during the 2022 Vascular Annual Meeting (VAM) in Boston (June 15–18). Using a continuum from one to eight (with nine being a special category for the terminally ill), researchers found the division is between four and five, between “non-frail but vulnerable,” to “mildly frail,” typically including an inability to shop independently and may require help with cooking and housework.

“CFS when applied by a geriatrician correlated very well with frailty scoring using CGA,” said Kraiss. “It’s appealing for use in surgery clinic; no additional testing is required and it’s quick and simple.”

Thus far, researchers have had an “encouraging single-site experience,” though the presenter brought up the question of whether CFS can be used “in multiple institutions by multiple providers and still retain its accuracy.”

Hales, who has been a research nurse and the VQI data manager at the University of Utah’s Division of Vascular Surgery for the past seven years, presented on a multi-institution experience with CFS.

Hales and colleagues charted CFS scores over three years at four participating centers in order to evaluate whether CFS is being accurately and consistently used across the centers.

Their data included 336 paired scores, which show how frailty status changed after VQI procedure. The presenter reported that 14% of those deemed non-frail before a procedure declined to frail status and that preoperative frailty improved in 40% of patients. Lower-extremity revascularization was found to be the procedure that most frequently caused frailty status changes.

Hales relayed a preliminary conclusion that these centers are using CFS differently. “There is a need for future analysis to calibrate the CFS score to a common gold standard, such as the VQI frailty scale or the risk analysis index or both,” the presenter commented.

In another presentation, Arya, who is an associate professor of surgery at Stanford University in Stanford, California, outlined a 30-second frailty screening tool called the Risk Analysis Index (RAI) she and her research team developed and then demonstrated how surgeons can use the RAI to measure frailty.

Arya has been studying frailty and surgery since 2014. “I knew the old methods wouldn’t work,” she said. “We need the tool to be rapid, able to be used by anyone, not be variable in terms of who’s using it, and easily administered.”

The team developed a 12-question, 14-point assessment around the five domains of function, physical, cognitive, nutritional and social. “The score robustly predicts who is going to die in the next six months,” she said. “As the score increases, we see an exponential rise in six-month mortality.”

She and her team have used the RAI with Veterans Affairs data and in a modified format in the VQI (VQI-RAI), finding it “highly predictive.” In addition, research into frailty and surgery has shown that vascular surgery “definitely is a specialty with a much higher burden of frailty,” she said, with almost 20% of patients in a high-risk category.

She also has researched the stress of surgery itself, with data indicating that in the frailest patients, the six-month mortality figure is 30 to 40%, “no matter the procedure.”

Arya concluded that RAI offers a “robust tool” for frailty assessment, and suggested that frailty assessment in the VQI could be improved by adding two to three more variables such as cognition, cancer comorbidity and granular function measures.

The study into clinical use of RAI continues, with a four-year VA funded trial on improving outcomes, using a “bundled care” approach. The presenter remarked on the overarching significance of the work: “We’re learning a lot about how to put specialists together to discuss how to optimize outcomes for the high-risk patient, do less-invasive or non-invasive procedures and provide goal-concordant care.” 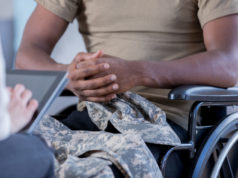