When Benjamin W. Starnes, MD, talks vascular trauma, he does so from a position of certain authority. As the recent Southern California Vascular Surgical Society (SCVSS) annual meeting (Oct. 24–25) heard, few in modern practice can draw on the sort of experience possessed by the University of Washington (UW) chief of vascular surgery. In sum: 15 years out in the confines of military theater and another 13 back home on civvy street in the more salubrious environs of hospital operating theaters.

So his paean for the use of endovascular methods in the treatment of vascular injury, detailed in his SCVSS guest lecture, “Alea iacta est: Crossing the Rubicon in vascular trauma from battlefield to bedside,” carries considerable merit. In the context of endovascular treatment in vascular trauma care, those Latin words from Roman history, attributed to Julius Caesar after he defiantly crossed the Rubicon River, sparking civil war, are prescient. “[Caesar] famously announced, ‘Alea iacta est.’ The die is cast, we will no longer go back, and he changed the Roman Empire and the world forever,” Starnes told the meeting.

In terms of endovascular care in trauma, too, there’s no turning back. For vascular injury’s Rubicon, read turn of the century. Around then, explained Starnes, there was a sea change. “There were improvements in imaging. It was now rapidly available and portable. There had been this strong tradition of, ‘Do we go to the operating room, or do we go to the imaging suite for angiography?’ I would submit that those two places are exactly the same place. In our hybrid operating rooms nowadays, we can do anything.”

Unlike in his military days.

His experience—both military and civilian—is considerable and illustrative to the topic at hand. From military life, there was the time he led a surgical team dispatched to the Pentagon after the building came under attack on 9/11; from civilian practice, a status that includes leading surgeon-scientist, professor and founder of innovative vascular therapy company Aortica Corporation, now owned by Terumo.

Earlier this year, Starnes was also at the head of efforts aimed at dealing with the impact of the COVID-19 outbreak on vascular practice. He and his UW team crafted an influential set of clinical practice guidelines, and Starnes was vocal in calling on his fellow vascular chiefs across the country to take urgent measures in order to conserve resources and save lives. His military background was prominent in how he viewed the threat posed by the virus and approaches to triaging patients.

SCVSS president JC Jimenez, MD, just about managed a career synopsis when he introduced Starnes to the meeting.

“His list of military awards is impressive and inspiring, and includes the following: Combat Medical Badge, one of the only two combat badges and only given to those who render medical aid while under direct hostile enemy fire on the battlefield; the Meritorious Service Medal; six Army Commendation Medals; and an Army Achievement Medal—just to name a few,” Jimenez said.

From back then, Starnes showed attendees some of the severe vascular trauma cases he treated in battlefield scenarios from Kosovo to Iraq. Injuries to the lower extremities, the aorta, the upper extremities, the neck. He told of spartan surroundings. Makeshift operating rooms. A power failure necessitating the deployment of a flashlight in the middle of a four-compartment fasciotomy. Limbs saved. The unrelenting backdrop of gunfire. Mistakes made and lessons learned.

On the fundamentals: War injuries—very different than civilian injuries—mean learning how to manage patients in a very different way, Starnes said. To illustrate the point, he drew on the case of the brother of the infamous Iraqi military commander dubbed Chemical Ali after he was shot and captured by U.S. forces. Starnes showed the man’s entrance and exit wounds from a high-velocity weapon and their stellate-appearing shape. “These are war wounds, and they need to be aggressively debrided otherwise the patient can die of sepsis.”

All of this serves as fuel for his current role at Seattle’s Harborview Medical Center. From this vantage point, he operates at the only level-one trauma center for five Western states, which means a lot of vascular injuries, Starnes said.

For his part, endovascular techniques bear many merits: They can temporize life-threatening injuries, don’t require direct surgical exposure and can serve as primary treatment. Starnes ran through its use in five vascular beds: trauma of the cervical, thoracic, axilo-subclavian, abdominal and ileo-femoral, and extremity regions. Rounding out, he described the case of a man whose mangled arm was saved from amputation—an example to illustrate the importance of maintaining open repair skills.

“This is not a normal extremity,” he said, pointing to both a graphic image of the injury, then the repaired arm. “But he has grip strength, and he has his arm.” Out on the frontlines of war, on the other hand, the arm would have been amputated and burned before the day was out. “We don’t have the resources on the battlefield to do what we can do every day in our modern hybrid operating rooms and in our modern hospital systems.”

Which recalls the lecture title: Alea iacta est. “Endovascular methods are now utilized to manage vascular trauma,” Starnes told the SCVSS audience. “I think that technology is behind the pace of innovation in this country. We know from multiple studies that endovascular methods have lower morbidity rates, higher success rates and reduced anesthetic requirements. And endovascular approaches to vascular trauma may be limited to certain regions of the body. And I would say that for extremity injuries, it’s pretty simple: Put up a tourniquet and do the proper repair.” 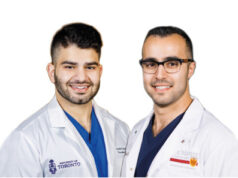